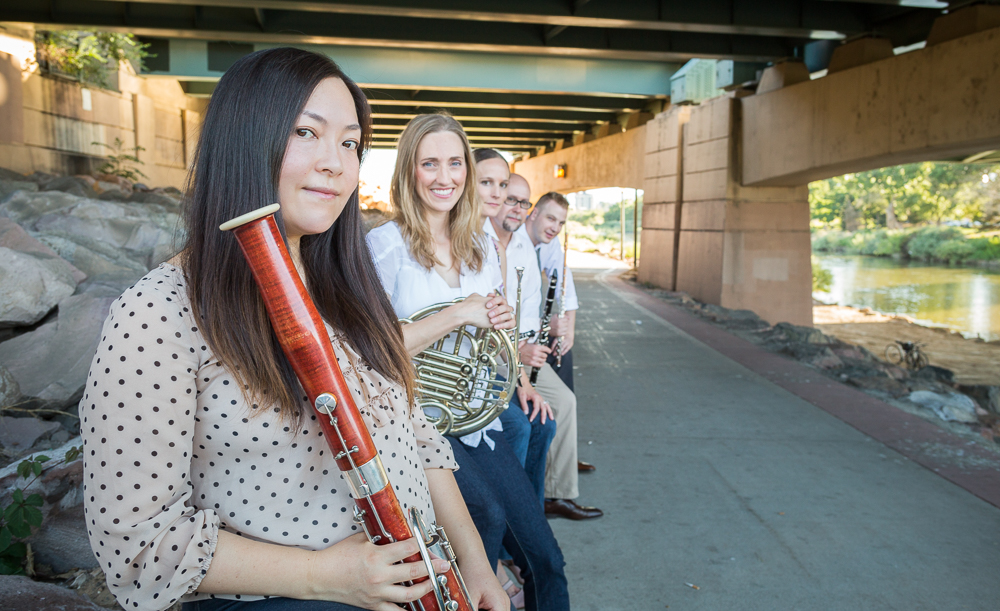 Known for their artistic sensitivity and exuberant stage presence, the award-winning Antero Winds have been attracting attention worldwide as a talented and engaging young international woodwind quintet. The Antero Winds began their work together as the Arundo Winds, the graduate woodwind quintet in residence at the University of Colorado at Boulder. While serving their Rocky Mountain community, the Antero Winds have also traveled the world to perform, compete, and educate, always striving to present performances that are as interesting and satisfying to music connoisseurs as they are to those with little prior experience with classical music. The distinct backgrounds, personalities, and styles of the quintet’s members combine to create the Antero Winds’ signature blend and performance style.

Educational outreach has brought the quintet to schools and communities throughout Colorado and the wider world. The Antero Winds have had an ongoing relationship with the Aspen Music Festival and School, which has brought them to Western Colorado for a series of mini-residencies with the public schools in the Roaring Fork Valley. They have also played school programs and led band clinics throughout the Denver metropolitan area. In 2006, the quintet traveled to Caracas, Venezuela, where they worked with students at a local FESNOJIV (nationally sponsored youth orchestra) school. These educational programs play a central role in the Antero Winds’ mission, and the quintet is constantly seeking new opportunities and approaches to share their passion for music with students and community members of all ages. 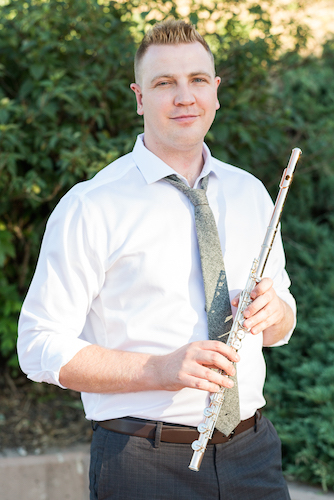 A strong advocate for the musical arts, Cobus is an avid soloist, chamber musician and pedagogue who has recently joined the faculty at the University of Massachusetts Amherst. Cobus can be heard live in concert across the world with summer performances in Colorado, California and Indonesia.

As an international soloist and chamber musician, Cobus has performed with orchestras in Russia, South Africa and the United States and on concert series in Taiwan, Japan, Germany and France. Cobus has been a prize winner at over a dozen competitions which include the 1st UNISA Southern African National Competition for Woodwinds and Brass, the Byron Hester Competition, the Myrna Brown Competition and the SAMRO International Scholarship Competition.

In addition to being the principal flute for the Boulder Chamber Orchestra, Cobus is also the flutist for the Antero Winds, a professional woodwind quintet that has been prizewinners at both the Plowman and Fischoff chamber music competitions. Cobus self-produced two recordings available through online platforms: Tríptico with classical guitarist Patrick Sutton and Mythavian with pianist Doreen Lee. 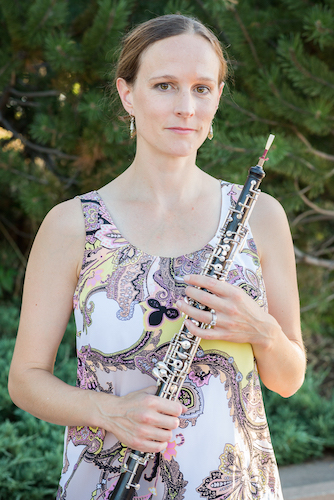 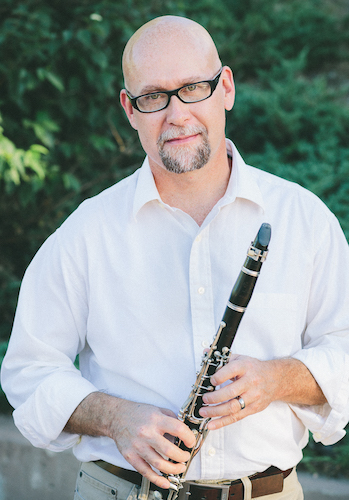 Brian Ebert (clarinet) joined Antero Winds in 2014. He has performed with many regional, national, and international artists and ensembles, such as Eyvind Kang and Jessika Kenney, Robert Moran, Dave Grusin, Evan Ziporyn, Morten Lauridsen, Ron Miles, the London Symphony Chorus, the MahlerFest Orchestra, the Boulder Symphony Orchestra, and the Colorado Symphony Orchestra. Brian is also the clarinetist (and a composer) with The Playground Ensemble, Denver’s premier new music ensemble.

A well-known educator in Colorado, Dr. Ebert taught lecture courses in music at the Community College of Denver and courses in audio production at the Art Institute of Colorado. He has coached instrumental music ensembles in Colorado for almost twenty years, including a long tenure at Pomona High School from 1997-2012. Dr. Ebert is currently on the music faculty at Regis University and he is recently appointed to Legacy High School in Broomfield, Colorado as Director of Orchestras and Assistant Director of Bands.

An avid composer, Brian has written works for orchestra, concert band, mixed chamber ensembles, and various solo instruments. In 2012 he was commissioned by The Playground Ensemble to compose a companion piece to Olivier Messiaen’s pivotal Quartet for the End of Time. The result was Fragments of Om, a septet which was premiered by the group later that year. His chamber trio Contradances (for bass clarinet/contra-alto clarinet, vibraphone, and violoncello) was also premiered by The Playground, and it appears on their debut recording Dreams Go Through Me. His most recent works include Beneath a Solitary Sky(clarinet/bass clarinet and laptop), and ubuntu (jazz ensemble and laptop). The latter was premiered live on KUVO 89.3 FM. 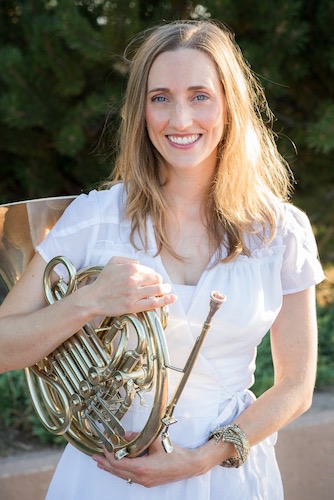 Megan Rubin is an active chamber and orchestral horn player. Originally from San Francisco, Ms. Rubin received a B.M. in Horn performance from the University of Denver’s Lamont School of Music and an M.M in Horn performance from the University of Colorado at Boulder where she served as the Graduate Teaching Assistant. She also received her music teaching licensure from CU Boulder and has been teaching middle school band and orchestra in the Saint Vrain Valley School District for many years. Additionally, Megan coaches young wind musicians in the Denver Young Artist Orchestra.

Megan is Second Horn with the Boulder Chamber Orchestra, and served as Assistant Principal horn with the Fort Collins Symphony for nearly a decade. In addition to performing with the Antero Winds, Megan enjoys traveling, cross-country skiing, rock climbing, photography and hiking. She has hiked over 30 of Colorado’s “14ers”, and has a black belt in Muay Thai. 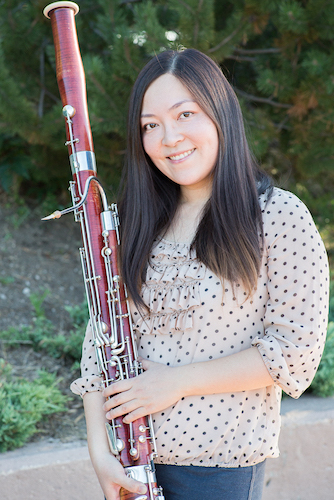 Ms. Kaori Uno-Jack has performed nationally and internationally as both soloist and chamber musician, earning many awards and much recognition. She won the Honor Competition at the University of Colorado twice (2004 and 2007), placed fifth of 137 bassoonists at the 24th Japan Wind and Percussion Competition in 2007, and was a finalist in the Tsuyama Japan International Double Reed Competition in 2003.

She graduated with her Artist Diploma in bassoon performance at the University of Colorado at Boulder in May 2009 after receiving her Master of Music degree at CU in 2008. Kaori graduated from the Aichi Prefecture University of Fine Arts and Music in Japan as one of four outstanding graduating seniors in the class of 2003. Her principal teachers include Yoshiyuki Ishikawa, Ryohei Nakagawa, Yoshiaki Aotani and Yoshiyuki Nakanishi.

Kaori is the instructor of bassoon at the University of Wyoming. She has been the bassoon instructor and associate dean of student affairs at Rocky Ridge Music Center since 2009.